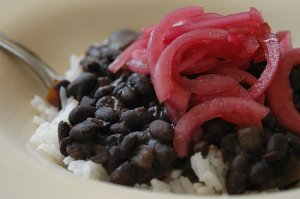 I’ve mentioned these more than once, and figured it was about time they got their own post. The little flavor-boosters deserve it, working so hard to enliven recession staples like Brazilian black beans (guess those guys need a post, too… so many good meals, so little time!).

Aren’t they pretty in pink? Something happens when the purple color inherent in the red onion meets the ruby hue of red wine vinegar. As they sit and meld, the onions turn bright pink. And without a drop of FD&C red#3.

Before you pickle-haters recoil in horror, let me describe in detail: remove from your mind anything resembling a brined cucumber. Because I am not the biggest fan of jarred dill pickles; sure, I’ll eat them on an occasional burger, or maybe chopped up in a tuna salad. But, even when pregnant, I’ve never opened up a jar and started crunching (ahem… Nan). I occasionally eat other “pickled” things, like okra or radishes; and the pickled banana peppers I ate recently atop a pork shoulder at The National were like little gems of vinegarized glory. These red onions, probably like several of the other vegetables mentioned, are pickled quite simply in a mixture of vinegar and sugar. They are tangy-sweet, with a touch of heat (from either jalapenos or black peppercorns). They are a wonderful topping for Mexican-type-fare, making interesting the most straightfoward quesadilla, and also do wonders for cooked beans. I’ve used them in sandwiches, or to top huevos rancheros or a tofu sauté. Most important, though: they are ridiculously simple to make, don’t require canning, and keep for quite a while in the refrigerator, making them useful to top a variety of dishes for a couple or more weeks.

I implore you to try them. If I could, I’d whip up a batch, and send a small jar to all who read — because tasting will make you a believer. There is a great recipe for a large batch in Molly Katzen’s Moosewood Cookbook (the recipe is hard to find in the book — it’s on the same page as “Just White Beans,” on p. 60 in my edition). It uses 4 red onions, cider vinegar, and whole peppercorns; it fills a quart Ball jar to the brim, and lasts for many weeks. I used to make this version, but now my refrigerator space is more limited, so I’ve been making them in smaller batches, as-needed. I’ve combined Molly’s recipe with one I saw in Cook’s Illustrated; here’s my small-batch version:

Place onions in a medium heat-resistant bowl. In a small saucepan, combine vinegar, sugar, salt, and peppercorns; bring to a simmer, and stir until the sugar dissolves. Remove from heat, and pour vinegar mixture over the onions. Cover loosely with foil, and allow to sit until cool to room temperature, about half an hour. Use immediately, or store in an airtight container (in the liquid) in the refrigerator for up to two weeks.

One thought on “Pickled red onions”