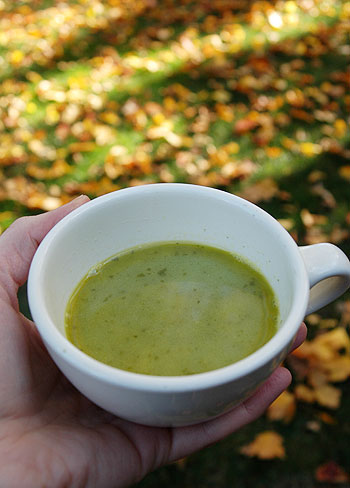 This was a recipe tried out of pure necessity. In one of my last CSA boxes — I’ve lost count as to how many more I’m supposed to get — I got nothing but greens. And a kabocha squash. But still — a box full of greens. More than I could fancy eating.

Thankfully, our CSA farm sends an email each week with suggested recipes. One of them was for Cream of Greens soup — something I’ve never even heard of. But I’ll eat just about any kind of soup, and I did have a bounty of greens. So I set to making a pot.

What can I say? If I’m writing about the experience, it had to be good. Case in point: a friend’s daughter, just turned 13, was here to help me with the kids on a crazy morning while I got tried to get caught up. It was lunchtime, and I had fixed her a grilled cheese sandwich. I didn’t even think to offer her the soup — it had been simmering on the stove — because I mean, c’mon, it’s greens, and she is less than thirty. But she, after stealing a few curious glances at the contents of my dutch oven, asked if she could try it. I gave her a small cupful; she made quick work of cleaning it out. She sat shyly, and talked about how good it was. I told her she could have as much as she wanted (still thinking she’s just being polite, surely she didn’t actually enjoy it), and before the words were out of my mouth she was back at the stove. Later, her mom told me that she had not been home for half a minute before she was telling her she simply had to get Mrs. Carter’s soup recipe.

So, there you have it. Teen-tested, mother-approved. I changed the original recipe a little; it called for way more liquid than seemed necessary or beneficial. I used vitamin greens and bok choy; but I really do think you could use any greens you have, or a mixture (save salad varieties, but who knows?). As always, I think the soup goes from good to fantastic if you use your own chicken stock (it’s easy! look here!). Don’t be afraid of the heavy cream; it adds a lot, and a little goes a long way. This soup is not terribly unlike Cream of Broccoli, if you need more of a taste reference; and while it might not make a great first course at your next social gathering, it will warm you to the core on a stay-at-home, still-warding-off-H1N1 Thursday night.

Heat olive oil over medium heat in a stock pot or dutch oven. Add onion, salt to taste, and cook until translucent but not brown. Add greens, potato, and stock. Bring to a boil, reduce heat, and simmer for about 25 minutes. Purée the soup using an immersion blender or in batches in a blender. Return to heat, add cream and nutmeg, and taste for seasoning. Serve immediately (it also freezes well).