This weekend, my house felt a bit Lord-of-the-Flies-ish. Tim was out of town, it rained all weekend, the Wee One had one of her fevers, and my preschooler relished a phase where he’s deemed the best way to pass the time is to pick up a random object and hit his older sister with it. To say that my house was operating at a level of chaos I’m a bit uncomfortable with is putting it mildly. By Sunday morning, we were all so sick of being cooped up that I knew the best way to rally the troops was to bake something new. So bake we did (after a few threats to can the whole project finally kept the 4-year old away from the 6-year old) — and except for the pieces of dried fruit meticulously picked clean and left behind on two plates, I’d say we all enjoyed the results.

This weekend’s baking (and sanity-salvaging) challenge: convert a scone recipe to dairy-free.

Until you’ve spent a few years trying to make dairy-free baked goods taste somewhat like their butter-laden counterparts, you don’t really realize how difficult that task can be. It’s all about the fat — good baked items (with some exceptions) need it. And many of the available options for butter replacement either don’t accomplish that task quite right, or they rely on corn or soy oils (i.e., vegan margarines) which we are either allergic to or are simply avoiding.

Enter coconut oil, from stage right: it’s a solid when at a cool room temperature, liquid when slightly warmer (around 76º), and actually good for you — overall a dazzling performer in the theater of baking. Depending on the processing, it can have a significant coconut flavor, or almost none — I prefer to use this kind for baking, as the coconut flavor all but disappears, which is a good thing when you don’t want everything you bake to taste like coconut (the trade-off being that you lose some of the nutritional benefits of raw coconut oil).

There’s also the liquid dairy conundrum: what is a satisfactory replacement for buttermilk? It’s easy to “sour” any type of milk replacement using vinegar. And for years, I accomplished this using unsweetened soymilk as a base. But when we removed most soy from our diet, I was left reaching for our jar of homemade coconut milk tonic (a can of coconut milk that has been thinned with water, with a little sweetener and vanilla added — you can see the recipe on this post or read below). The extra fat of the coconut milk made my baked goods much more fluffy and delicate — almost just like cow’s milk. Even better would be to make my own cultured coconut milk — a coconut milk yogurt perhaps — and thin that out to replace buttermilk. But I’m not quite there.

These days, when I convert a baked good to dairy-free, I start by replacing the butter with coconut oil, palm shortening (a non-hydrogenated alternative to Crisco), or a mixture of both. I then replace the milk with coconut milk tonic. Lastly, I add a little more salt — sometimes doubling what’s called for — since even unsalted butter and dairy milk add a deeper flavor profile than coconut oil and milk. The extra salt balances out what the dairy-free fat lacks in flavor.

The scone was one of the last classic breakfast pastries left to tackle; until we started using solid coconut oil, they didn’t seem to be an option for decent dairy-free (try “cutting” a liquid vegetable oil into flour). We used Penelope Scones as a starting point, and then made them more nourishing by using mostly sprouted whole grain flours (I sprout my own grains, but you can buy them here), and replacing the sugar with rapadura (dehydrated cane juice). The result was a delicious breakfast treat that didn’t send our blood sugar crashing, didn’t send my little guy into hives and belly aches, and didn’t send the rest of us sneaking to the trash can to throw out something that tasted like baked twigs.

Just more proof — which I sometimes need — that dairy-free doesn’t have to mean taste-free. And, a little baking can go a long way in the world of kid entertainment. 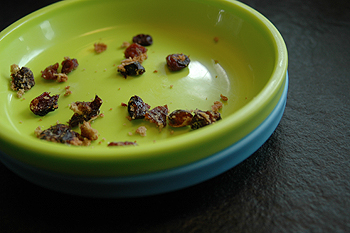 Pour the tablespoon of apple cider vinegar into a glass measuring cup, then add enough coconut milk tonic to make one level cup of liquid. Set aside while you prepare the dry ingredients.

In a large bowl, whisk together the dry ingredients (flour through salt).

Using a pastry blender, cut in the chilled coconut oil and shortening until the mixture looks like bread crumbs and no pieces are larger than peas.

Whisk the orange zest into the coconut milk/vinegar mixture.

Pour the coconut milk mixture over the dry ingredients, and stir very gently with a rubber spatula just until the mixture comes together. If it is still very wet, you can sprinkle on extra flour and fold into the dough until it is workable. Gather the mixture into a rough ball, and turn out onto a floured surface. Using floured hands, press gently into an 8-inch round disk, about 3/4″ thick. Cut into 8 wedges. Brush the tops with more coconut milk tonic. Place about an inch apart on an ungreased baking sheet or stone. Bake 14-18 minutes, or until nicely golden. Let cool about 5 minutes before digging in.

In a medium saucepan, combine one can of full-fat coconut milk with 2 1/2 cups filtered water. Warm just enough so the coconut solids liquify. Stir in 2 Tbsp pure maple syrup (or honey, but maple syrup tastes better) and 1 tsp vanilla extract. Keep in a mason jar in the refrigerator, and use as needed in dairy-free baking. (Note: once the mixture has cooled, it is often necessary to puree the tonic using a hand-held stick blender or a food processor, as the coconut milk solids tend to form lumps in the tonic.)