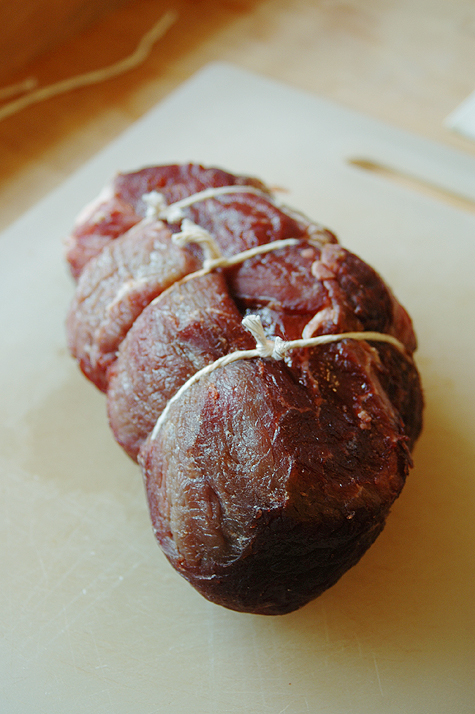 Well, it’s that time of year again. The deep-freezer is empty of most everything except a few jars of frozen stock and the organ remnants of last year’s beef quarter that I’ve never gotten around to trying to serve my family (heart or liver, anyone?). We’re transitioning from a summer of grilled brats and fresh-vegetable-heavy dinners to the wonderful season of hearty soups and stews, roasts and meatloaf. In other words, we’ve gotta get that freezer filled back to capacity with a fresh beef quarter.

I’ve had a few conversations with friends in the past few weeks, wondering: where is the best place to purchase freezer beef? Well, we’re making that decision again, too — and the answer to that question basically comes down to three factors that must be placed into some sort of priority rubric: type of beef, flavor, and price. Every family will end up with different priorities, often weighing different preferences within families (what we must contend with in our house, though my husband admits I get final vote since I cook it all). Not to mention finding a local farm who can meet your priorities once they’re set. It’s not an easy task — but once you find a solution, the money saved is well worth the effort.

In my ideal world, I would find a local farm that truly “grain-finished” their beef — as in, let the cow eat grain only for the last few weeks of life. We have not found that yet in our area — and so I instead have opted for 100% grass-fed options. But they are very pricey, and my larger half wasn’t so crazy about the flavor (objection overruled, but here’s hoping we can all be happier with the flavor this go-around).

Have you bought a beef quarter? If so, what are your preferences, and have they changed since the last time you filled your freezer?

Many thanks for all the birthday wishes last Friday, via comment or otherwise — it was, to say the least, an exciting day. This was foreshadowed by a comment from my big sister (by a mere 15 months) on that post:

Sorry to be a big bucket of cold water… but please be careful of the weather today. You are headed to an area that has an almost 100% chance of tornadoes.

And, I mean, I knew this. I have access to weather.com, knew that schools in the Southern part of the state were letting students out early. But it was my FORTIETH BIRTHDAY. We had reservations at a great restaurant, had pricelined a something-star non-refundable hotel room for the night. My in-laws had come to town to keep our kids, my BIL & SIL were driving from Lexington to meet us. The plans had been in place for weeks. In short, we would be driving to Louisville that day. Weather be damned.

But then a few hours later, we found ourselves waiting out a second tornado warning in a rest stop off 65-south, just three miles north of Henryville, IN — where the most intense damage occurred. Late Friday night, looking at a map of the tornadoes that touched down that day, the biggest cluster was exactly where we were Friday afternoon. We literally drove into tornadoes.

This fact flies in the face of each of my family members. Of the females in my family, I am the only one without a tornado phobia (we can discuss the phobias I *do* have at a later date). All three of them, I’m sure, considered us certifiably insane.

So the next morning, at breakfast, my big sister sent an email to my whole weather-phobic family. It included a tongue-in-cheek list of upcoming vacation ideas for me and Tim:

She’s a funny one, my big sister.

Once we got there, it was the perfect celebration; but even late-starting birthday trips must end. When ours did, we returned home to a sick child (confession: he was sick when we left — do you now get how badly I wanted to go to Louisville?). Between nurse-playing for the past 48 hours and getting caught up on laundry, I wanted to start this week with something easy and comforting for dinner: enter the slow-cooker pot roast.

(the chuck roast after being seared, before hitting the slow-cooker)

I love this recipe because it’s simple, cheap, and makes its own gravy (a stick blender helps in making this a sort-of one-pot meal). The long-braising makes what can be a tough cut of meat fall-off-the-bone tender. All you need is mashed potatoes and a green vegetable, and you’ve got the perfect comfort dinner.

I use a small (2#) bone-in chuck roast, because that’s what came with our beef quarter. The bones give the dish more flavor, and since the meat falls off anyway, there’s no reason to get a boneless chuck (though that should work if it’s what you have). If you have a larger roast, you can use the same amount of vegetables, but might need more stock or water for adequate braising.

I consider myself manly in many ways. No, I don’t benchpress anything heavier than, say, a 5 1/2-quart Le Creuset dutch oven. And while I’m definitely plucking more random hairs than I did 20 years ago, I’m not really that masculine looking. But give me a good craft beer, and sit me in front of a television set during college football season or March madness, and I’m a pretty happy girl. Or take me to a social event, and I’m more likely to drift toward a group of men conversing than a group of women. I’m not sure why I tend toward these ways; I grew up the middle child of three girls. We’re all that way — call it genetic?

But in our kitchen, my spouse and I? We fall into some typical gender rolls. I do most of the cooking, and Tim helps do dishes. I mop the floors, and he takes out the trash. I grocery shop, and he eats what I buy. But when it comes to grilling, he’s the one in charge, always. I literally don’t even know how to light a grill fire. Part of me is slightly ashamed of this, but then the other 99% of me thinks this is a great setup, and I’m more than happy to let him take the reigns. Because, as much of a control freak as I can be, I don’t really care at all to be in control of a grill.

I wonder: does grilling require the recall of some sort of primitive hunter-gatherer instinct? What is it, with men and fire?

Ultimately, I don’t care what causes the preference. Because My Man? He’s good at grilling.

END_OF_DOCUMENT_TOKEN_TO_BE_REPLACED

Just trying to protect you; no disrespect intended. Although, I have a feeling that if you were offended by the consumption of animals, I would have lost you long ago. With my guttural desires to shout devotion to a well-cooked pork shoulder from the tabletop of a fine restaurant, and all.

My news: we have our grass-fed cow. And although the purpose of the cow’s demise was our consumption, I feel good about it for a few reasons: 1) “Bessie” didn’t have to break a leg; her voyage ended quickly, without her even knowing what happened; 2) we have supported local agriculture by purchasing the cow and having it processed locally; and 3) we split said cow about 10 ways, involving that many households in a process that has given us an opportunity to be physically involved with each other’s food and sustenance (albeit a bit loosely).

I’m really not intending disrespect to vegetarians by the title of this post. I have (briefly) considered the practice of vegetarianism at various points in my life, and while I’ve never been fully convicted of any ethical reasons to make that leap, it has been a thought that simmered in my mind more than once. In short, I don’t take lightly the subject of eating animals (although — if you visit my house — you will walk into a living room that is covered by a cowhide rug that I purchased at Ikea; this rug has induced surprise in more than one of my guests — maybe I look like an ethical vegetarian?). I like the chapter in Omnivore’s Dilemma that addresses this debate; while I don’t agree with all of Pollan’s reasoning, I land where he lands. That, and the fact that I don’t know if I could live the rest of my life without eating bacon.

I have to say, though: I’ve loved it. The cow. The one that ate all that grass, and now partially fills a borrowed deep-freezer in our basement. Some surprises:

But I have to say: so far I’ve loved the experience. The beef tastes great; we’ve only been less-than-wowed by some burgers we grilled (they are easy to burn because the high fat content causes the fire to leap up and scorch the burgers). I made a pot roast that was the best I’ve ever made, and it was from the most basic recipe in the Joy of Cooking (sear the roast, sauté a mirepoix, add some red wine to the pot, and let it cook slowly for a few hours). I’ve used the ground beef to make meat spaghetti sauce, skillet lasagna, and Pakistani Kima (a curried beef dish from the More With Less cookbook). It’s been better than comparable cuts from the grocery so far — but, I think we all think the real test will come with the steaks. I’ll keep you updated.

I encourage you to look for a similar setup in your locale, if you’ve not already. Even if you can find a local (think, within 100 miles) farm that raises grass-fed beef and sells the cuts, you can usually get a good price on a whole cow. It was work, organizing all the families and splitting it up; but you certainly don’t have find 10 families (and we won’t, next time) — and the work was worth it. You can also arrange to have a smaller ground beef ratio, which we will also do next time; for this one, we had given the instruction to get “as much meat as possible” from the cow, which is why we ended up with that high ground ratio. In the future, we’ll ask for more steaks and roasts. If you live around Athens and are interested in doing this, contact me and I can get you the info on where we got ours, and even set you up with some people that might be interested in splitting another one. Also, if you’re concerned about space, keep in mind that a regular-sized top-freezer will hold about 100 pounds of meat. Of course, that’s without anything else. But it gives you a frame of reference.

In other news, I’m taking the wee one with me to Asheville this weekend, for a somewhat-annual “girl’s weekend.” As always for this event, much discussion has centered around where and what we’re going to eat. I’m experimenting, for the first time, with freezing scone dough — I’ll bake them tomorrow morning without having to give too much pre-coffee thought to pea-sized clumps of butter. We’re planning dinner out one night, and haven’t decided if we’ll hit one of our old faves, such as Tupelo Honey or Early Girl, or try something new (to us), like Limones. And — before you ask — no, I don’t like Salsa’s, or Laughing Seed, but that explanation deserves a post all it’s own; it’s sort of like admitting that I don’t like Cecilia’s cakes.